I began my teaching career as a secondary school English teacher. When my own children were small, I offered to help in a primary school. I worked with two groups of year 6 children preparing them to compete in a local Performing Arts Festival. I rewrote the scenes they were performing and changed the endings to suit the children in the groups. At the time, I just wanted them to enjoy performing. I didn’t feel especially confident about my writing; I had only ever written for myself or designed materials for classroom use.

When the children eventually competed in the Performing Arts Festival, I was thrilled when they won the silver medal. The school was overjoyed too. The following year, they asked me to do more, so I decided we should enter a Monologue category as well. I wrote about 14 during the summer holiday.

I wanted the characters in the monologues to feel real and contemporary. I thought about children in a fix or puzzled about something. I played with real-life situations but also some fantasy ones. I found I could shape and hone the scripts because I was working in school and had the voices of children in my head, as well as my own family at home. I love listening to children chatting to one another and the ways they comment on things that are going on around them. I especially love the humour which children bring to many things. I often chose everyday things. For example, a child is in a classroom gazing out of the window at others running around in the playground but can’t join them because he/she has a broken leg. A child is lost on a school trip in a museum and wonders what to do. A child thinks their guinea pig might be an alien.

Monologues are huge fun for writers because you are moving right inside a character’s head, finding out their beliefs and dilemmas. We entered many local festivals over subsequent years and one festival judge said, “Where can I get these monologues?”. When I explained that they were my own writing he said, “You have to get them published.”

I felt especially proud of engaging lots of year 5 and 6 boys who had initially been more reluctant and seeing children take ownership of the scripts and make them their own. Within 2 years I had added Duologues to the mix. These scenes for two often had crazy scenarios, like a vampire in a doctor’s surgery and the horrified child who is sitting in the waiting room too.

I began running my own arts festival in the school, so more children could get involved, to really develop confidence in speaking and it continues to this day. In a typical year, over 200 children volunteer to take part. Half of year 6 auditioned last year to do a monologue. I added more categories: Own Poem, Poem by Heart, Public Speaking as well as the Monologues and Duologues. Each year I rehearsed and prepared the children from the end of September ready for Heats at the end of November and finals in the first week of December. The school say they have noticed a significant impact on children’s achievement across Literacy. There is a fantastic buzz in school when the festival rehearsals are underway. For the finals, I bring in external judges who give feedback and award medals. Parents and Governors are able to see the performances in a showcase.

Let’s Perform! is the culmination of more than ten years of working with children in 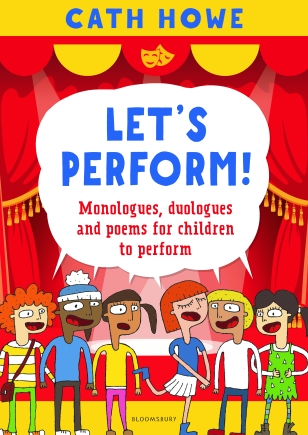 KS2. The book uses scenarios, language and humour that children can really relate to. It is intended as a flexible resource; I have seen the content used in a number of ways and often adapted it myself. Each script has suggestions for performance and creative suggestions for pupils’ own writing. Learning by heart is part of the National Curriculum. Children can learn the poems and scripts by heart and perform them in a festival-type event in school or outside it as I have described. They are not very long; 3-5 minutes is typical.

Alternatively, the scenes can be the starting points for children’s own creative writing or performing. I often lead workshops where we analyse and perform monologues and the children write their own in response. The scenarios in the book lend themselves to story- writing too. Many of the Monologues, Duologues and poems have been used in class assemblies and end-of-year events. The Christmas poems have been performed by large groups of readers and actors in the local parish church. I’m so pleased the book is photocopiable- it makes it easy to give out scripts and create creative projects.

I hope teachers will find it a really useful and enjoyable resource. One teacher friend commented “This is going to be my go-to Friday afternoon book.”

Cath Howe is an author and teacher with a real passion for writing and creativity. She has been working with schools for over a decade, running workshops on everything to do with writing and performing. Let’s Perform! is out now!